“[T]he strategy to deluge the Senate also carries significant risks as the House managers tried to hammer home somewhat contradictory messages: their case is ‘overwhelming,’ but at the same time it’s incomplete without calling new witnesses and subpoenaing documents they say are necessary …” (“Dems Unload ‘Overwhelming’ Impeachment Case On The Senate — Even As They Press For More,” Politico, 1/22/2020)

Over 7 Days, The Senate Has Already Heard Testimony From 13 Different Witnesses In 192 Video Clips And Received Over 28,000 Pages Of Documents

During the impeachment trial’s opening phase, 192 video clips of 13 different witnesses were played in the Senate: 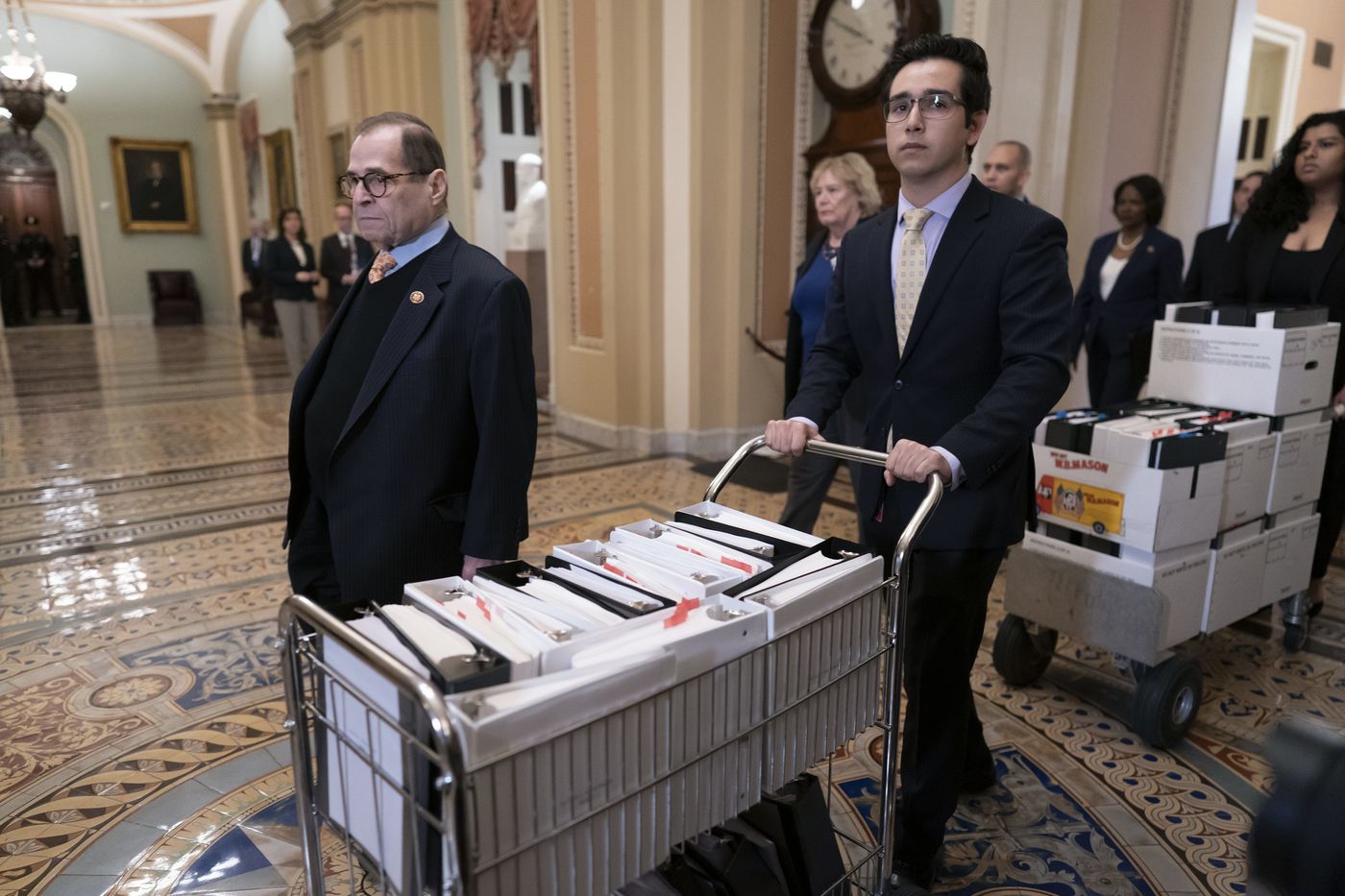 AP Photo Caption: “House Judiciary Committee Chairman Jerrold Nadler, D-N.Y., arrives at the Senate with carts of documents as work resumes in the impeachment trial of President Donald Trump on charges of abuse of power and obstruction of Congress, at the Capitol in Washington, Saturday, Jan. 25, 2020.” (“Trump Lawyers Argue Democrats Just Want To Overturn Election,” The Associated Press, 1/25/2020)

Yet Sen. Schumer And Other Senate Democrats Insist On New Witnesses And Documents

SEN. KAMALA HARRIS (D-CA): “[R]esponsibility now rests on the shoulders of each member of the United States Senate…. Which means demanding that the American public and each member of this body receive all evidence, documents and individuals who are witnesses so that we can engage in a fair deliberation and make a decision …” (Sen. Harris, Press Conference, 1/16/2020)

Democrat House Managers: ‘We Heard From Enough Witnesses To Prove The Case Beyond Any Doubt At All,’ ‘We Realized We Had The Evidence We Were Going To Get, And That It Was Sufficient To Prove Our Case’

HOUSE MANAGER REP. JERRY NADLER (D-NY): “We brought the articles of impeachment because despite the fact that we didn’t hear from many witnesses we should have heard from, we heard from enough witnesses to prove the case beyond any doubt at all.” (CNN’s “Outfront with Erin Burnett,” 1/15/2020)

CNN’s JAKE TAPPER: “But what do you say to those who say, that’s what exactly what the House Democrats did by not going to court to try to force subpoenas and force witnesses?”
HOUSE MANAGER REP. ZOE LOFGREN (D-CA): “We did go to court, as you know.”
TAPPER: “But you didn’t pursue it in court. You ultimately...”
LOFGREN: “Ultimately...”
TAPPER: “... withdrew the cases and went to the Senate.”
LOFGREN: “... we realized we had the evidence we were going to get, and that it was sufficient to prove our case.” (CNN’s “State of the Union,” 1/26/2020)

HOUSE MANAGER REP. ADAM SCHIFF (D-CA): “It is true that the record compiled by the House is overwhelming. It is true the record already compels the conviction of the President in the face of unprecedented resistance by the President. The House has assembled a powerful case, evidence of the President’s high crimes and misdemeanors that includes direct evidence and testimony of officials who were unwilling and unwitting in this scheme and saw it for what it was.” (Rep. Schiff, Congressional Record, S380, 1/21/2020)

REP. NADLER: “There is an overwhelming case beyond any reasonable doubt that the president betrayed the country ...” (Rep. Nadler, Press Conference, 1/15/2020)

HOUSE MANAGER REP. SYLVIA GARCIA (D-TX): “So as this first slide indicates, in this portion of our presentation, we will discuss the evidence that shows overwhelmingly that President Trump directed this scheme with corrupt intent, with one corrupt objective: to obtain foreign assistance in his reelection bid in the 2020 United States Presidential election.” (Rep. Garcia, Congressional Record, S493, 1/23/2020)

And Many Senate Democrats Have Been Saying, As Far Back As October, That ‘I Think The Evidence Is Clear,’ ‘The Case Is Already Overwhelming,’ ‘For Many Of Us, This Isn’t A Mystery That Still Needs To Be Unwound,’ ‘After Those Arguments I’d Be Certain That … The President Would Be Convicted’

SEN. CHUCK SCHUMER (D-NY): “The arguments of the House managers were overwhelmingly on the merits, on the facts…. I thought about this as I was listening. If this was an actual trial, and you were a jury, after those arguments I’d be certain that the [House] managers would prevail and the president would be convicted.” (Sen. Schumer, Press Conference, 1/22/2020)

MSNBC’s KATY TUR: “If the vote was put to you today, I know this is an ‘if,’ to convict the president in the Senate and remove him from office would you be voting yes?”
SEN. KAMALA HARRIS (D-CA): “Yes, based on everything I’ve seen. Yes…. The main subject of the impeachment, which is the issue of yet again, Donald Trump eliciting help from a foreign government to interfere in our election of our President of the United States. In this case we’ve basically got a confession.  We’ve got a display of consciousness of guilt and attempt to cover up. You know, I don’t know how much more we need … But based on everything we know, including an admission by this president, I don’t know that it leads in any other direction except to vote yes, which is what I believe I will do based on everything I know.” (MSNBC’s “MSNBC Live,” 10/07/2019)

CNN’s DANA BASH: “From what you have seen, is there any chance that you would vote to acquit the president?”
SEN. AMY KLOBUCHAR (D-MN), Presidential Candidate: “At this point, I don’t see that. But I’m someone that wants to look at every single count. I have made very clear I think this is impeachable conduct.” (CNN’s “State of the Union,” 12/01/2019)

SEN. RICHARD BLUMENTHAL (D-CT): “Trump’s actions threaten our democracy. But the greater threat would be if America became a place where such misdeeds went unpunished. Fortunately, our Constitution tells us in no uncertain terms that the president’s actions deserve the strongest penalty Congress can provide — removal from office. If the rule of law means anything, we must follow its command.” (Sen. Blumenthal, Op-Ed, “Yes, Trump Is Guilty Of Bribery,” The Washington Post, 12/03/2019)

MSNBC’s HALLIE JACKSON: “So there is a possibility you’ll vote to acquit him? You could maybe vote to acquit him is what I hear you saying.”
SEN. MAZIE HIRONO (D-HI): “No, that is not what I’m saying at all, Hallie. What we have on one side is all of the factual evidence on the House side that led to the articles of impeachment. We have that…. So we have all the factual evidence. What I want to hear from the president is, what are his defenses? Does he have an explanation that exonerates him? Short of that, I’m going to vote on the basis of the facts. And the facts are that he committed an impeachable act and I will vote to convict him.” (MSNBC’s “MSNBC Live with Hallie Jackson,” 12/19/2019)

SEN. CHRIS MURPHY (D-CT): “I think the first thing to note is that, for many of us, this isn’t a mystery that still needs to be unwound. The evidence that we have thus far makes it crystal clear, to me at least, that the president directed a vast conspiracy to defraud taxpayers of dollars to try to convince a foreign power to intervene in the United States’ 2020 presidential election. So, I think it’s first important to make clear that, for many of us, we think the story is pretty well filled in.” (MSNBC’s “The Beat With Ari Melber,” 1/6/2020)

SEN. BOB CASEY (D-PA): “You’re dealing with a president, clearly, I think by the evidence, who solicited the interference of a foreign government in the upcoming election and also, as part of that, made a request to that government to investigate a political opponent and at the same time to investigate a debunked, loopy theory about the last election. So it’s a grave matter. I think senators take it very seriously.” (CNN, 1/22/2020)