Autopilot Left-Wing Opposition Prepares To Fill In The Blanks Again

SENATE MAJORITY LEADER MITCH McCONNELL (R-KY): “President Trump has stated he will announce his nominee to the Supreme Court the day after tomorrow. We do not yet know which legal all-star from his list he will nominate. But strangely enough, we already do know exactly what the far left will start shouting the instant she or he is introduced…. [Y]ear after year, decade after decade, the far left’s playbook stays exactly the same. To them, the nominee makes no difference. Every time in 45 years that a Republican president has nominated someone to the Supreme Court, the exact same set of cliched horror stories are wheeled out of storage, dusted off, and paraded past the American people…. The same unhinged attacks pour out every time. The same absurd scare tactics. Every single time.” (Sen. McConnell, Remarks, 9/24/2020) 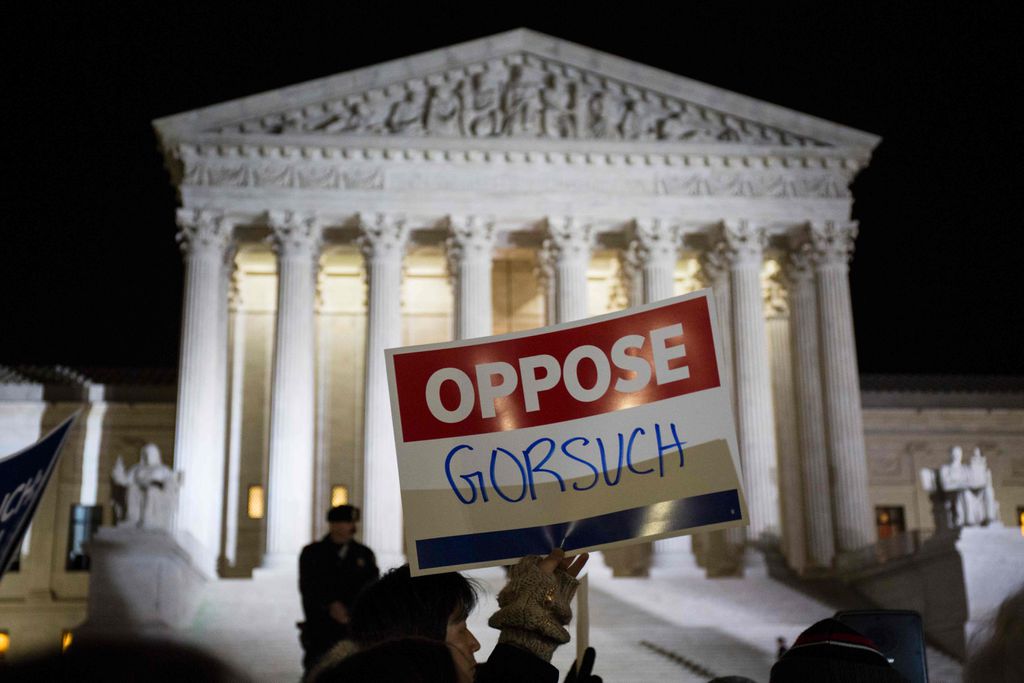 (AFP/Getty Images via The Boston Globe) 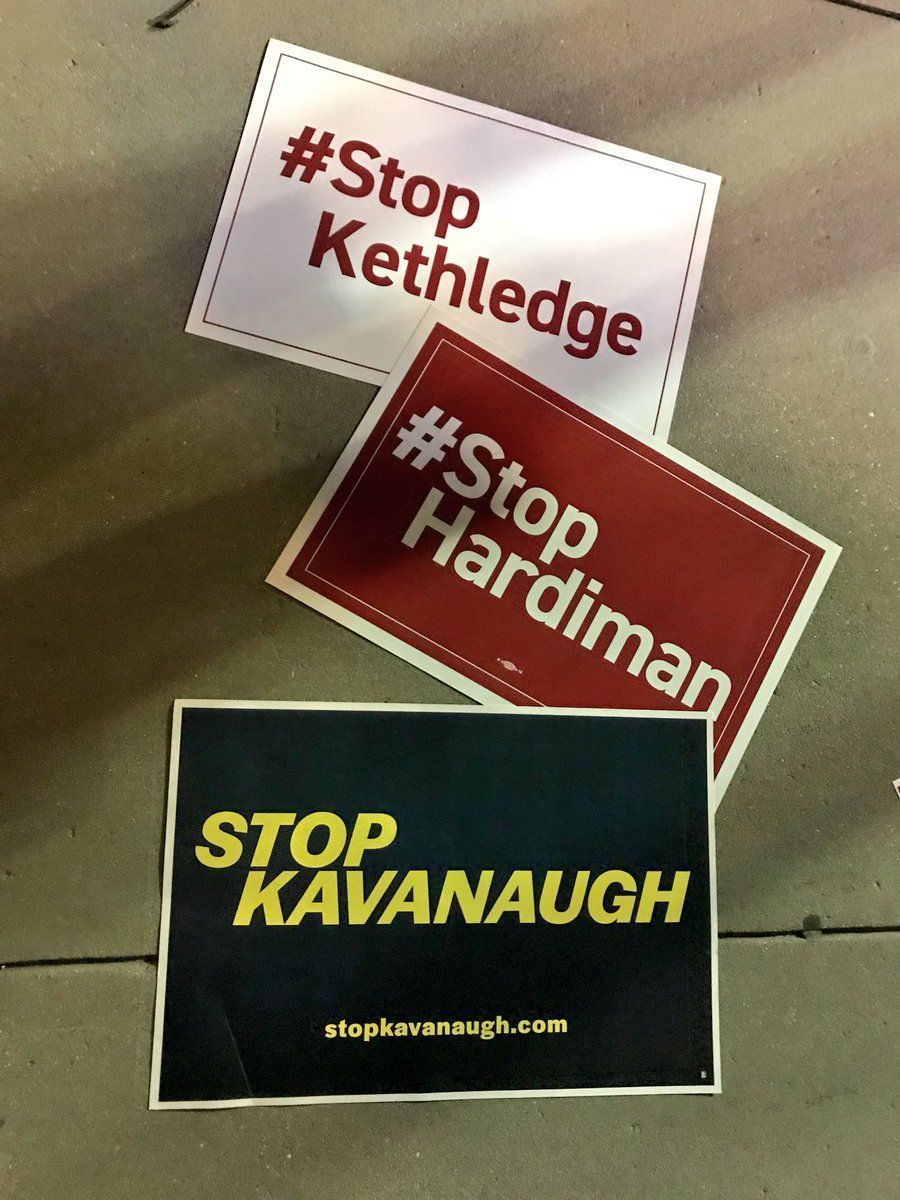 “[A] statement released Tuesday night by the organizers of [2017’s] Women’s March on Washington in response to President Donald Trump's nomination of Judge Brett Kavanaugh … contained one glaring error: the name of the nominee had not yet been filled in.” (“Women’s March Slammed For Goof In Statement On Kavanaugh Supreme Court Nomination,” USA Today, 7/10/2018)

1975: THE LEFT ON JUSTICE STEVENS: ‘Extraordinary Lack Of Sensitivity To The Problems Women Face’

MARGARET DRACHSLER, NOW: “I am here this afternoon to express my grave concern regarding both the nomination of John Paul Stevens to the Supreme Court and the manner in which it was accomplished.” (U.S. Judiciary Committee, Hearing, 12/8/1975)

1987: THE LEFT ON JUSTICE KENNEDY: A ‘Troubling’ ‘Sexist’ ‘Unqualified To Sit On The High Court’

NATIONAL ORGANIZATION FOR WOMEN ON KENNEDY: A ‘Sexist’ Who ‘Would Be A Disaster For Women’

“The National Organization for Women yesterday became the first major organization to oppose Supreme Court nominee Anthony M. Kennedy… and branded Kennedy a ‘sexist’ unqualified to sit on the high court. … NOW President Molly Yard told a news conference that Kennedy, a federal appeals court judge in Sacramento, ‘would be a disaster for women’ if confirmed as a justice.” (“NOW Opposes Kennedy For Supreme Court,” The Washington Post, 11/20/1987)

PEOPLE FOR THE AMERICAN WAY ON KENNEDY: ‘Troubling’

NAN ARON ON KENNEDY: ‘I Am Troubled’

“‘I am troubled by some of his opinions in the civil rights area,’ said Nan Aron of the Alliance for Justice.” (“Early Senate Reviews Indicate Confirmation Likely,” The Washington Post, 11/12/1987)

1990: THE LEFT ON JUSTICE SOUTER: ‘Ample Reason To Fear’ Him ‘Ending Freedom For Women In This Country’

MOLLY YARD, NOW President: “…by your consideration of David Souter for appointment to the Supreme Court you are really considering ending freedom for women in this country.” (U.S. Senate Judiciary Committee Hearing, p.675, 9/18/1990)

NOW Legal Defense And Education Fund: “…we have ample reason to fear what his appointment would mean to the future of reproductive and other women's rights, civil rights and individual rights.” (U.S. Judiciary Committee, Hearing, Pg.572, 9/1990)

PEOPLE FOR THE AMERICAN WAY ON SOUTER: ‘Disturbing’

ARTHUR KROPP, President, People For the American Way: “What record Souter has compiled on constitutional questions is both sparse and disturbing. The views he has expressed on civil rights, sex discrimination, church/state separation, and reproductive freedom are reasons for very real concern.” (“Fans, Foes, In Betweens Speak Out On Souter,” USA Today, 9/13/1990)

“The director of the Washington-based Alliance, Nan Aron, said Souter's statements and opinions ‘threaten to undo the advances made by women, minorities, dissenters and other disadvantaged groups.’” (“The Souter Nomination,” St. Louis Post-Dispatch, 9/9/1990)

“The alliance is convinced that Judge Souter will not protect the rights of those suffering discrimination on the basis of race, gender, ethnicity, religion, sexual orientation or literacy.” (“Souter Nomination Opposed By Liberal Legal Affairs Group,” AP, 9/22/1990)

2005: THE LEFT ON CHIEF JUSTICE ROBERTS: ‘Troubling,’ ‘A Cavalier Attitude Towards Economic Justice For Women’

NATIONAL ORGANIZATION FOR WOMEN ON ROBERTS: ‘Women’s … Rights Will Be Set Back Decades’

PEOPLE FOR THE AMERICAN WAY ON ROBERTS: ‘Troubling,’ ‘Uncharitable View Of The Courts’

PEOPLE FOR THE AMERICAN WAY: “Significantly, John Roberts has troubling views about the courts …” (“People for the American Way Report in Opposition to the Confirmation of Supreme Court Nominee John Roberts,” U.S. Senate Judiciary Committee Submission for the Record, 9/2005)

Joe Biden Got An Early Start This Year, Already Asserting That With Any New Nominee, ‘Women’s Rights As It Relates To Everything From Medical Health Care Is Going To Be Gone’

“Mr. Biden spent part of the day campaigning in North Carolina, a battleground state. As he headed there, he had warned that if Republicans confirmed Mr. Trump’s nominee, ‘women’s rights as it relates to everything from medical health care is going to be gone.’” (“Biden Gives Cautious Answers on Breonna Taylor and the Supreme Court,” The New York Times, 9/23/2020)