It Beggars Belief When Senate Judiciary Committee Chairman Dick Durbin Unconvincingly Claims He Doesn’t Know Where The Idea ‘That The Democrats Are Inspired To Appoint Some Number Of New Justices To That Court … And, Thereby, Tip The Balance’ When His Party Has Spent Years Talking Up Court Packing, Even Introducing Bills To Do So Last Year While Durbin Himself Refused To Rule It Out

SEN. DICK DURBIN (D-IL), Senate Judiciary Committee Chairman: “It seems that Sen. McConnell is concerned, as many Republicans are, with the notion of packing of the Court. The notion behind that is that the Democrats are inspired to appoint some number of new Justices to that Court--maybe four--and, thereby, tip the balance back toward the Democratic side. The question, obviously, before us is, Where does that idea come from? I will be honest with you, even as chairman of the committee, I don’t know.” (Sen. Durbin, Congressional Record, S.1785, 3/24/2022)

‘Where Does That Idea Come From?,’ Asks The Judiciary Committee Chairman, Who Has Refused To Rule Out Democrats Packing The Court When Given The Opportunity

Nearly Two Years Ago, Durbin Himself Conspicuously Left The Door Open To Packing The Court During An Interview

CNN’s ANA CABRERA: “Did you discuss, on your strategy call today with Democrats, what you would do if Democrats took control of the Senate in November? Would you add seats to the Supreme Court?”
DURBIN, September 2020: “Well, we basically have kept options open.” (CNN, 9/19/2020)

Last Year, Durbin Voted With All 50 Democrats Against An Amendment To Rule Out Court Packing

SEN. TOM COTTON (R-AR): “[L]ast year, in certain fringe quarters of the Democratic Party, it seemed popular to call for packing the Supreme Court, for expanding the number of justices on the Court… Now, obviously, all Republicans oppose such a radical idea. … I offer a simple amendment, an amendment that is backed by famous liberals … that we should not pack the Supreme Court. ... So I would invite my Democratic colleagues who have said they don’t want to pack the court to simply waive this point of order and let’s have an up-or-down vote on one of the most fundamental tenets of the rule of law: that you do not pack the courts because you don’t like the way they rule.” (Sen. Cotton, Congressional Record, S.448, 2/05/2021) 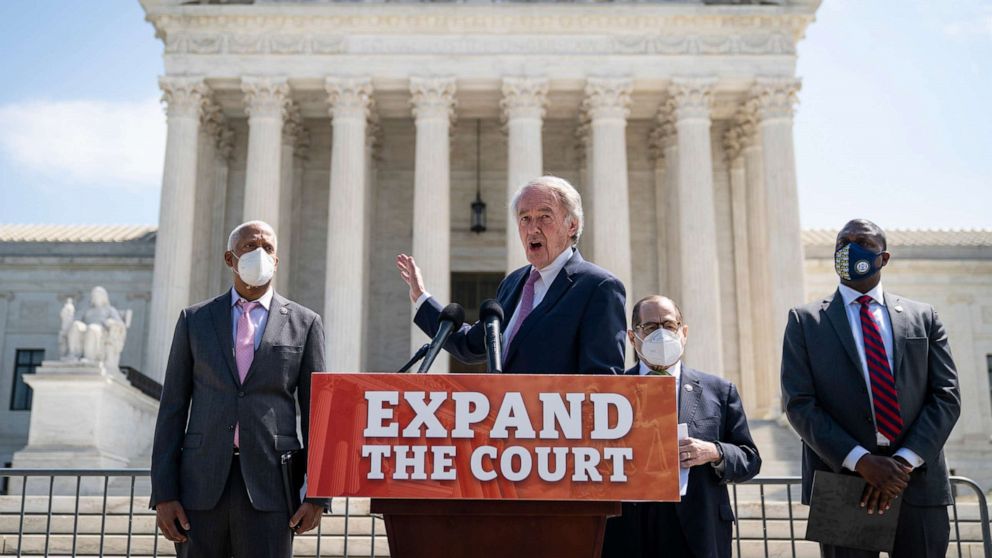 SEN. ED MARKEY (D-MA): “This legislation will restore the Court’s balance and public standing and begin to repair the damage done to our judiciary and democracy, and we should abolish the filibuster to ensure we can pass it.” (Sen. Markey, Press Release, 4/15/2021)

“A group of House and Senate Democrats on Thursday introduced legislation to expand the Supreme Court from 9 members to 13, trying to spur momentum for the first change in the makeup of the court in 150 years.” (The New York Times, 4/15/2021)

THEN-SEN. KAMALA HARRIS (D-CA): “We are on the verge of a crisis of confidence in the Supreme Court… We have to take this challenge head on, and everything is on the table to do that.” (“2020 Dems Warm To Expanding Supreme Court,” Politico, 3/18/2020)

“Sens. Kamala Harris, Elizabeth Warren and Kirsten Gillibrand told POLITICO they would not rule out expanding the Supreme Court if elected president, showcasing a new level of interest in the Democratic field … Driving the push are liberal groups like Demand Justice and Indivisible …” (“2020 Dems Warm To Expanding Supreme Court,” Politico, 3/18/2020)

SEN. AMY KLOBUCHAR (D-MN): “I am open to it [expanding the size of the Supreme Court]. It depends on what happens with the Senate, if that’s realistic.” (The New York Times, Accessed 3/29/2022)

“Sen. Mazie Hirono, D-Hawaii, said she has been ‘talking with people who have different ideas about what we can do — including adding to the court, including having certain circuit court judges cycle in and other ideas’ like term limits. ‘I’m open to those kinds of suggestions,’ she said.” (“Democrats Warn GOP: Don’t Fill A Supreme Court Vacancy In 2020 Or We’ll Retaliate,” NBC News, 8/3/2020)

CNN’s JOHN BERMAN: “Joe Biden was asked last night repeatedly if he wins the election, would he favor adding more justices in the Supreme Court. He would not answer that question. Where do you stand on that?”
SEN. MAZIE HIRONO (D-HI): “This is long overdue court reform as far as I’m concerned and I have been thinking about court reform and what we can do regarding the Supreme Court to make it so much more objective. And so, this is not something that a lot of us have not thought about.”
BERMAN: “Joe Biden would not take a position on adding justices to the court last night. What do you feel like you need to here from him on that subject?”
HIRONO: “What I get from Joe Biden is, first and foremost, he has to get elected. Let’s keep our eye on the ball. … So, first and foremost, Joe Biden has to get elected. Kamala Harris has to get elected. Democrats need to get elected to the Senate. We need to take back the Senate so we can address some of the hypothetical things you’re taking about which I have been thinking about for years now.” (CNN, 9/22/2020)

HOUSE SPEAKER NANCY PELOSI (D-CA): “I think it’s [expanding the Supreme Court] an idea that should be considered and I think the president is taking the right approach to have a commission to study such a thing. It’s a big step. It’s not out of the question. It has been done before in the history of our country a long time ago. And the growth of our country--the size of our country, the growth of our challenges and terms of the economy, etcetera might necessitate such a thing.” (Speaker Pelosi, Press Conference, 4/15/2021)

Packing The Supreme Court Came Up Repeatedly During Democrats’ Presidential Primary, With Multiple Candidates Saying They’d Be Open To It, And One Who Actually Released A Plan To Do So Is Now In A Member Of The President’s Cabinet

Pete Buttigieg Boasted Of His ‘Bold’ Plan To ‘Reform The Body Itself, As Our Country Has Done At Least Half A Dozen Times In Its History’

CNN’s ERIN BURNETT: “Mayor Buttigieg, you have discussed expanding the court from 9 to 15 justices. What’s your response to the vice president?”
NOW-TRANSPORTATION SECRETARY PETE BUTTIGIEG: “That’s right. When I proposed reforming the Supreme Court, some folks said that was too bold to even contemplate. Now, I’m not talking about packing the court just with people who agree with me, although I certainly will appoint people who share my values, for example, the idea that women’s reproductive freedom is an American right.” (Democratic Presidential Debate, Westerville, OH, 10/16/2019)

TOM STEYER: “I support expanding the size of the Supreme Court.” (The Washington Post, Accessed 3/29/2022)

FORMER GOV. STEVE BULLOCK (D-MT): “I’m open to discussion on different ways we can depoliticize the Supreme Court, including expanding the court.” (The Washington Post, Accessed 3/29/2022)

GOV. JAY INSLEE (D-WA): “[W]e also need to restore Americans’ faith in the court and restore the balance ... I’m open to any ideas and discussion on how to reset that balance.” (The Washington Post, Accessed 3/29/2022)